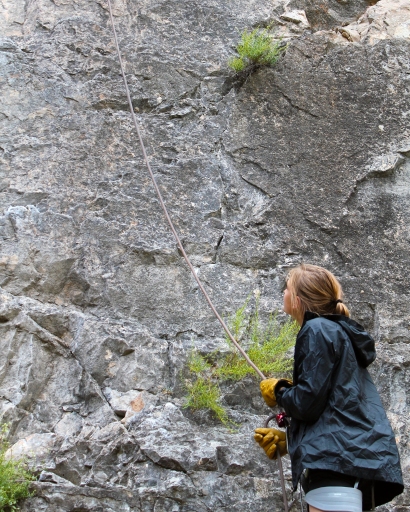 Your average non-climber understands that ascending a cliff requires a certain amount of skill and expertise. This non-climber has little to no idea of the range of skill or what skills exactly that might entail, but (s)he gets that climbing involves some form of competence.

However, not everyone appreciates the skill involved in lead belaying. Yes there is the basic “this is your brake hand and EVEN IF A CHUCK OF GRANITE LANDS ON YOUR HEAD NEVER EVER LET GO” rule one must learn, but there is much more than just paying out and taking in slack involved in the art.

My climbing friends taught me the basics: How to give out slack when someone is clipping and take in the extra when (s)he has clipped, and not to think of lowering as a race from the anchors to the ground. However, as a small female being taught to belay from guys with 50-plus pounds on me, I quickly understood that I would need to adapt their methods to prevent them from grounding out.

Here are some things I’ve learned about belaying those significantly heavier than me:

Now, here are a few things to note if you’re over 150 pounds and are belaying me (or someone weighing 110 or less):

In fewer words: If you have me as a belayer, it’s a soft catch guaranteed. However, if you’re belaying me (or someone else smaller than you), please pay attention—as you should do for every climber—and give a little hop, so I get a similar “cushy” experience.