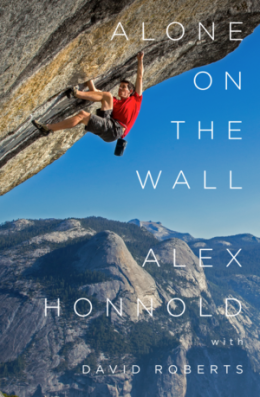 Alex Honnold released his first book, “Alone on the Wall,” on November 9 and has been traveling the country giving book talks since. Before his first presentation and signing in Portsmouth, New Hampshire, Alex let me ask him a few questions about his book, climbing while on the tour, and what he defines as “easy climbing.”

How did the idea for “Alone on the Wall” come about?
It happened because David [Roberts] made it happen. A bunch of people—agents and publishers—had approached me with book ideas, and David had already written a profile with me for Outside Magazine and knew my family. He’s a really good writer and has worked with a bunch of my friends. I’d read a bunch of his books when I was a kid and really liked them. So, David was like: “Would you like to do a book project? This is how long it would take; this is how much work will be involved; this is the whole process.” I was like: “Oh sweet, perfect.” It was pretty painless. We locked in a deal with Norton and then started working in July [2014] and were done by Christmas. And the publishing process has taken another 11 months.

How did you and David split up the work of writing the book?
It’s pretty much all David’s writing, except that everything that’s in my voice is taken from something I’ve written before. His sections are mostly taken from his own research and interviews. The book is split half and half between our voices. It’s constant switching back and forth between the voices, but it’s really clear; I talk in italics, and he doesn’t. It was a necessary structural device because he said that if it was all in my voice it would be too understated, so he wanted something to give it proper context.

What is your favorite climb in “Alone on the Wall”?
My favorite chapter in the book is called “Fear and Loving.” It’s about my soloing the Original Route on the Rainbow Wall in Vegas [Red Rocks].

What was the most challenging part of writing your first book?
Just typing and [making] the time for all the reading, writing, and editing, and that was with David doing all the real work. I would just wait until the situation got dire and then be like f*** I need to edit and crank it out. By the end it was like, Oh wow, this is actually going to be published, and it’s all in my voice. Oh no. So I had to go back and edit some of the first chapters again.

How much of the book highlights your free solos, and how much is focused on roped climbing?
It’s half and half. A few of the chapters are focused on the Nose speed record, the solo triple—the solo triple isn’t even free soloing; it’s with a rope and some gear—and the Fitz Traverse. So it’s pretty varied. Even the chapters that focus on free soloing also have other trips and expeditions.
Part of the appeal of writing the book was to make sure that all the soloing was placed in the proper context.

How are you fitting climbing in around the book tour?
I’m not. It sucks. I was hangboarding in the hotel stairwell today. I roped it to a pipe.
Normally I travel with a portable pull-up bar that goes into a doorframe, and I hang my hangboard off it, but that requires a standard size doorframe. All hotels have their own thing, and this one didn’t have anything remotely close [to fitting].  So then I found some pipes and did a whole training session hanging off of them. It really makes you feel like a weirdo, being this shirtless dude in the stairwell maxing on small edges while housekeeping walks by. It was pretty ghetto.

The age-old question: How does your mentality and fear change when you’re approaching a free solo versus a roped climb?
Most of my scariest climbing experiences have been with a rope. You’re more willing to push into stuff that you certainly wouldn’t without a rope. You’re like Oh bad rock; I’m sure it’ll get better. So you keep going, and then you’re like It’s getting worse, but I can’t go back down cause I’m f-ed. So you just keep pushing and pretty soon you’re terrified. But without a rope you’d be like This is scary and go back down.

How much of your soloing is onsight versus rehearsed routes?
It’s probably mostly onsight because it’s mostly easy.

What do you consider easy?
5.10d and under is mostly onsight. 5.11 and up is mostly rehearsed.

Random quote that didn’t fit into the above:
The whole East is a no-man’s land of barren waste. I can’t get past Colorado.