This post-workout carb and protein combination, in a 4:1 ratio, is the fitness and nutrition communities’ recommendation for promoting ultimate recovery from any and all types of physical activity deemed a “workout.” It turns out that chocolate milk is a cheap, tasty way satisfy this 4:1 balance, and thus it has been promoted enough that when I type “chocolate milk as” into Google, “chocolate milk as a post-exercise recovery aid” pops up first on the suggested search list.

But what about those of us who don’t want to drink chocolate milk after every workout? Personally, I find the store-bought kind too thick and rich, and chugging a cup or two after a workout sounds like a stomach ache in the making. However, I have found a few cheap, easy smoothie alternatives with the desired carb and protein mix. Enjoy: 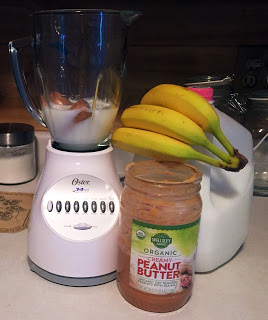 WHY IT’S AWESOME:
First off, it’s delicious (assuming you like peanut butter and bananas). Secondly, it provides one with the optimum ratio of post-workout nutrients in a healthier, more complete package than chugging 8 oz of chocolate milk. You retain the eight grams of protein from the milk and add in 19 grams of natural sugars for your extra carbs, while now benefitting from the three grams of fiber, 13 percent of your daily potassium, and 15 percent of your daily vitamin C you get from adding a banana instead of cane sugar to your milk. Additionally, the peanut butter offers healthy mono- and poly- unsaturated fats and additional fiber and protein. All of your macronutrients (carbs, protein, fat) are now blended into one delicious shake that’s easy to sip after a hard session on your outdoor project or on your drive/walk home from the gym.

FOR EXTRA PROTEIN :
Some studies suggest that ingesting 20-25 grams of protein post workout is optimal for protein synthesis and recovery. For an all “real food” protein boost, try adding 1/2 cup of plain Greek yogurt to your smoothie or simply double the recipe to ensure you get your 20 grams. You can also add a scoop of your favorite protein powder to the mix, though I’d recommend unflavored, vanilla, or chocolate (green tea and pb and banana sounds less appetizing).

FOR THOSE WHO DON’T LIKE PB, BANANAS, OR BOTH:

I’ve found that drinking a protein and carb rich smoothie or having another snack with simple sugars and at least 10 grams of protein (ex. plain greek yogurt sweetened with a banana or maple syrup) reduces my muscle soreness after a hard session, allowing me to train two days in a row before taking a much-needed rest day. (Well, unless I’m super psyched and the weather’s nice; then I might be climbing for more than two days on.)